Home About About our Region VER Regional Perpetual Trophies

Traditionally, these perpetual trophies have been presented at the VER Annual Dinner and Fleece Competition.

The trophies are as follows: 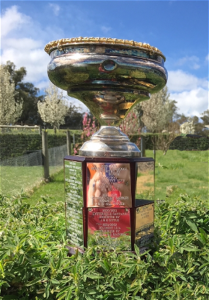 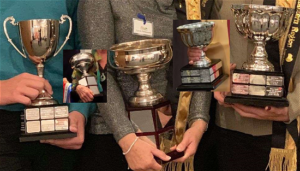 Introductory dates of the trophies are:

Our sincere thanks and gratitude to David Daddo (Pitchingga Ridge Alpacas) for collating the information on the VER Perpetual Trophies.

Lyla was a foundation member of the Region and from the early ʻ90s to her untimely passing in 2002, was totally committed to the Region and to the Alpaca Industry, serving the Region in every possible capacity – a highly reputed alpaca breeder; show organiser and programmer; a dedicated committee member, Secretary, Treasurer, Vice-President and President. Her legacy lives on with us, through this award.

Keith, a product of Dookie College, with cattle and dairy farm origins that began in South Gippsland, traversed into Queensland and returned to South Gippsland where he and his wife Glenda established Mawbanna Alpacas. Keithʼs animal husbandry background together with Glendaʼs alpaca ﬁbre processing skills created a successful venture into quality Suri breeding. Together the couple travelled Australia to learn of the processing of alpaca ﬂeece and further develop their involvement in specialised alpaca handcrafts.
An outdoors man, an ambassador for the alpaca industry, Keith passed away in 2009.

Affectionately known as “The Godfather”, Bill passed away in 2006. A long serving committeeman, a Vice- President and President of the Region and Chairman of the Regional Showing Sub-committee, Bill was the force behind the Show rules and protocols we adhere to today. The consumate Chief Steward, his workshops throughout Australia and NZ stand as testimony to his skill. His unique love of natural fIbres lives on through this award.

Dianne loved alpacas and the Industry with a passion.
A long standing member of the Region, Dianne served extensively at both regional and national committee level. In co-ownership with her husband Ron, their highly successful Shanbrooke Alpaca Stud gained early world-wide recognition. A national and international Show judge, Dianne was accorded an AAA Life Membership for her service to the Industry. Dianne, who passed away on 12th January 2012, is remembered with great affection.