Home About the Victorian Eastern Region

About the Victorian Eastern Region 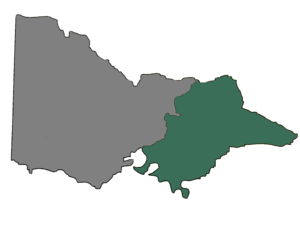 Welcome to the website of the Victorian Eastern Region of the Australian Alpaca Association (VER).

The region’s boundaries start at Albury/Wodonga, then down the Hume Highway to Benalla, south on the Midland Highway to Mansfield, picks up the Maroondah Highway to Merton, Healesville, Lilydale and on to Melbourne, then follows the coastline to Mallacoota.

The VER covers a geographically diverse area from the vineyards of the Yarra Valley and the Mornington Peninsula, to the rich soil farming districts of Gippsland, the coastal extension from Port Phillip to Mallacoota and the grandeur of the Great Dividing Range.

Within the Victorian Eastern Region there are over 100 registered alpaca breeders, several with larger studs in excess of 100 alpacas to others with only a few. Many members also promote and sell alpaca products.

Within the VER region, there are three sub-groups that operate to help cover a geographically diverse area by providing support in that locality.

Traditionally, the VER have presented the following perpetual trophies at the VER Annual Dinner and Fleece Competition.

The trophies are as follows:

There are a number of local farms who open their properties and alpacas to the public. Each offer a different experience

Our Smart Future was produced in 2014 as a celebration of 25 years of the Australian alpaca.

Lyla Fisher Memorial Trophy – Alpaca of the Year Huacaya
Inaugurated in May 2002.
Lyla was a foundation member of the Region and from the early ʻ90s to her untimely passing in 2002, was totally committed to the Region and to the Alpaca Industry, serving the Region in every possible capacity – a highly reputed alpaca breeder; show organiser and programmer; a dedicated committee member, Secretary, Treasurer, Vice-President and President. Her legacy lives on with us, through this award.

Keith Turner Memorial Trophy – Alpaca of the Year Suri
Inaugurated in April 2010.
Keith, a product of Dookie College, with cattle and dairy farm origins that began in South Gippsland, traversed into Queensland and returned to South Gippsland where he and his wife Glenda established Mawbanna Alpacas. Keithʼs animal husbandry background together with Glendaʼs alpaca ﬁbre processing skills created a successful venture into quality Suri breeding. Together the couple travelled Australia to learn of the processing of alpaca ﬂeece and further develop their involvement in specialised alpaca handcrafts.
An outdoors man, an ambassador for the alpaca industry, Keith passed away in 2009.

Bill Plunkett Memorial Trophy – Champion Fleece
Inaugurated in April 2007.
Affectionately known as “The Godfather”, Bill passed away in 2006. A long serving committeeman, a Vice- President and President of the Region and Chairman of the Regional Showing Sub-committee, Bill was the force behind the Show rules and protocols we adhere to today. The consumate Chief Steward, his workshops throughout Australia and NZ stand as testimony to his skill. His unique love of natural fIbres lives on through this award.

Dianne Condon Memorial Trophy – Best New Breeder
Inaugurated July 2012
Dianne loved alpacas and the Industry with a passion.
A long standing member of the Region, Dianne served extensively at both regional and national committee level. In co-ownership with her husband Ron, their highly successful Shanbrooke Alpaca Stud gained early world-wide recognition. A national and international Show judge, Dianne was accorded an AAA Life Membership for her service to the Industry. Dianne, who passed away on 12th January 2012, is remembered with great affection.

Introductory dates of the trophies are:

Alpaca of the Year (Huacaya), first awarded in 1995, re-constituted as the
Lyla Fisher Memorial Trophy.

Alpaca of the Year (Suri)

Alpaca of the Year (Suri), first awarded in 2004, re-constituted as the
Keith Turner Memorial Trophy.

Our sincere thanks and gratitude to David Daddo (Pitchingga Ridge Alpacas) for collating the information on the VER Perpetual Trophies.

The VER’s connection with Farm World started in 1998 and alpacas have made a significant contribution to the Farm World displays ever since, click History of VER Farm World here to read more

Held annually the Fleece Competition has been a strong presence in the VER’s history. Click here to read more.

The VER 10 Year Service Awards are presented to those members who have contributed for 10 years or more to our region.

A Certificate of Appreciation is awarded to a financial member of the AAA who has made a significant contribution to the AAA at a Regional or National level.

We are grateful for the contributions of the following members who have made significant contributions to the Victorian Eastern Region.